Premarin is a popular drug in the US used to treat womens menopausal symptoms. It is produced by the pharmaceutical company, Wyeth Pharmaceuticals. This drug has become the 3rd most prescribed in the world making Wyeth over 1 billion per year. Wyeth sets quotas, prices and picks PMU farmers contracts. The production of this drug has cost the lives of millions of horses.

Premarin (conjugated estrogen) is extracted from the urine of pregnant mares. For 6-7 months of their 11 month pregnancy, the mares are confined to small tie stalls, where they cannot turn around of lie down comfortably. They are connected to urine collection pouches which travel through hoses to plastic containers. They get no exercise and stand in these stalls the entire time. The mares are fed and watered on a time release system and are deliberately deprived of water because it makes the estrogen more concentrated. This is a tough life for the mares and their life span may be shorter. They may only be used a couple of years and then sent to slaughter. As for the foals that are produced year after year, many are sold for slaughter.

These foals are among those that may be used for pony leather or pony skin. They are normally auctioned off at a young age of 2-3 months. In the last couple years there has been more awareness of these foals also and many rescues devoted to helping these foals.

In recent years many farmers have lost their contracts. The popularity of premarin has gone down since some physicians believe it has been responsible for many women’s health problems including breast and uterine cancer. There are other alternatives that can be used such as naturally occurring estrogens. 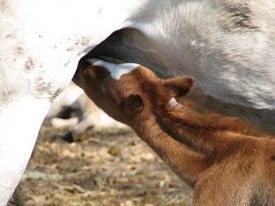 WHAT YOU CAN DO

Call Wyeth-Ayerst in the US (800) 666-7248 to protest how Premarin is produced or write to Robert Essner, President.